SEO and SMM are like pizza and cheese: you can get one without the other, but, believe me, it isn’t worth it.

Nowadays SEO cannot be effective without well-executed content curation. And that’s where social media kicks in — it helps you unlock untapped potential. Compared to other marketing channels, social media benefits SEO in unexpected ways. It’s not surprising that SEO and SMM have slowly become closely intertwined activities that all businesses want to take advantage of. But how exactly can SEO and SMM work together? Do social media signals affect your site’s visibility in Google? I’ve been investigating this topic for quite a long time and here’s what I’ve learned so far:

In this post, I want to highlight the following idea: When you share content on SMM channels you’re not only getting engagement, but also bringing visitors to your site. This in turn helps you boost your site’s visibility: SMM corresponds to SEO and indirectly influences website performance in Google. My analysis shows that SMM impacts SEO much more than you might think. The truth is that, paradoxically, organic channels bring more traffic to SMM-focused blogs than to SEO-focused ones.

To conduct my research, I included in my sample 10 well-known blogs.

And five blogs that focus on SMM:

During all stages of my research, I also used the following tools:

First, I went to SimilarWeb to learn which sources drove traffic to these sites in order to determine “winners” and “losers.” I expected that social media-focused blogs would perform much better when it comes to SMM traffic compared to SEO blogs. It sounds reasonable that SMM blogs know better than others how to attract and build relevant communities on social media and then convert them into loyal readers.

Below you can find a graph that represents the distribution of SMM traffic across all the resources studied: 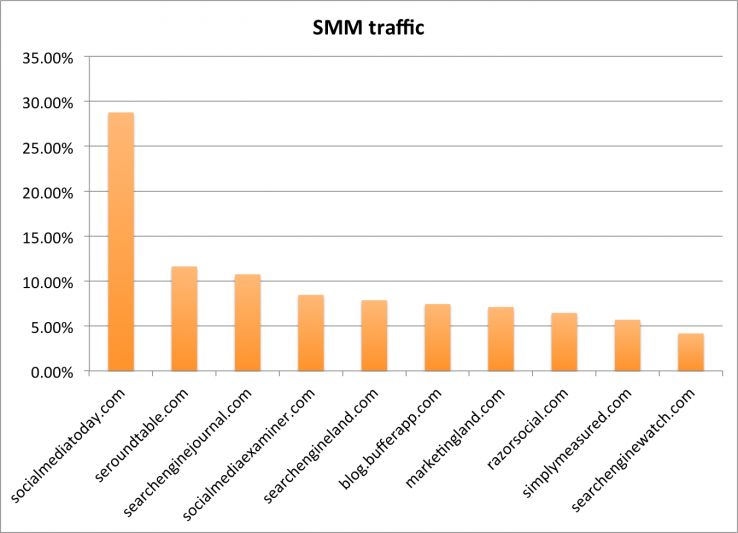 Data was collected with the help of SimilarWeb

The absolute winner is socialmediatoday.com with 2.6 times more visitors from social media channels compared to seroundtable.com, which follows it. It’s also worth mentioning that the other two leaders are blogs that are not from the SMM niche: seroundtable.com (11.63 percent of traffic coming from SMM channels) and searchenginejournal.com (10.75 percent).

The top three sites that are leading in organic traffic are all SMM-focused blogs that get more visitors from organic results than social media sites. This data supports my assertion about the role of SMM in the SEO process that I mentioned in the first part of this article: 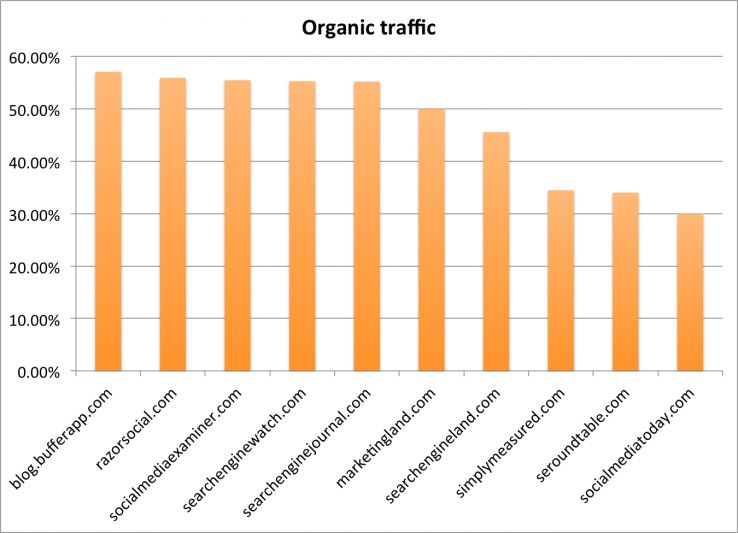 From examining my own clients’ Twitter and Facebook analytics insights, it’s clear that users are more likely to like or share content rather than click on it. To earn a sufficient number of visitors from social media sources, you need to keep a close eye on what kind of posts not only engage users, but also get clicks. And if your goal is to drive traffic, then you need to focus on writing engaging tweets that will make your followers want to click on them. At the very least, you have to make sure that you actually include a link in your post. Because — let’s face it — we’ve all forgotten to share a link in our tweet at least once.

After learning how much traffic those blogs received from social media channels, I was quite keen on finding out exactly how they attract visitors. In particular, I was interested in whether the virality of content, as well as the engagement of particular SMM sites, influence the number of visitors these sites get from those traffic channels. Ideally, if users are actively sharing your content on Twitter, Facebook, etc., then it should bring users to your site. Due to the difficulty of collecting data, I was forced to narrow down the list of SMM sites and focus on analyzing how well content performs on Facebook and Twitter.

The Battle for Traffic: Organic SEO vs. Social Media Marketing

How to Build Social Media Into Your Content Marketing Processes

Kindness as Currency: How Good Deeds Can Benefit Your Local Business

How to Get a Customer to Edit Their Negative Review

The Battle for Traffic: Organic SEO vs. Social Media Marketing